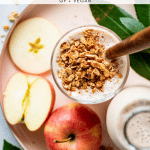 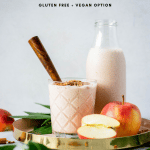 This cinnamon apple pie smoothie is an absolute treat of a smoothie! Made with simple cinnamon roasted apples, your favorite greek yogurt (regular or dairy free for a vegan option!), cinnamon, and topped with the most delicious maple sesame granola. Delicious enough for a treat, and healthy enough for breakfast or a mid day snack! Gluten free + vegan option.

A quick note on this recipe! The original version of this post was published back in 2015. Since then I’ve re-tested the recipe, updated the photographs, and the content. I’m republishing it for you today to enjoy! I hope you continue to make and love this delicious cinnamon apple pie smoothie! xo

It’s almost the end of 2019, and we’re having smoothies that taste like apple pie. So no matter what else has happened this year, this feels like a win 😉

Let me just start out by saying that this apple pie smoothie never fails to give me all the fall feels. It’s made with so many delicious seasonal things that I just know you’re going to love it as much as we do!

Here’s the deal: It’s not the quickest smoothie you’ll ever make. There’s a few steps involved. It takes a little bit of dedication, but I promise you, IT IS SO WORTH IT.

This cinnamon apple pie smoothie combines two of my more recent recipes that I shared here on NK for this glorious cup of seasonal autumn yum. Perfect for breakfast, a quick snack, or even a healthy dessert.

What are the recipes?

To be fair, you could substitute the maple sesame granola with another granola that you have on hand to cut down on the prep time for this recipe. BUT if you’re looking for a bomb ( super easy! no fuss!) granola recipe then you’ll definitely want to whip up a batch of this one. It goes perfectly with this smoothie and one batch will leave you with some extra to enjoy throughout the week –> #basicfallgoals

What does this cinnamon apple pie smoothie taste like?

This smoothie is made with:

How to make a cinnamon apple pie smoothie

Okay, so here’s where the bit of prep comes in.

You’ll want to start by first whipping up a batch of both these paleo baked cinnamon apples (or a double batch!), and the best toasted maple sesame granola.

Once those are made, making the actual smoothie is so easy. It basically comes together like any other smoothie recipe.

Make sure you start out with CHILLED cinnamon baked apples for the best texture. Add all the ingredients to a blender (except the granola) to a blender and blend away until smooth and creamy.

Once done, top it with a healthy handful of granola and dig in with the biggest spoon you can find!

A few notes on the recipe

This cinnamon apple pie smoothie is an absolute treat of a smoothie! Made with simple cinnamon roasted apples, your favorite greek yogurt (regular or dairy free for a vegan option!), cinnamon, and topped with the most delicious maple sesame granola. Delicious enough for a treat, and healthy enough for breakfast or a mid day snack! Gluten free + vegan option. 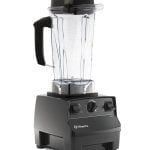 Open
For the next week I'll be refraining from posting

Open
The weather has taken a very sunny turn this week

Open
30 minute romesco pasta all set and ready for your

Open
Spending the day wrapping up my SPRING E-COOKBOOK

Open
Give me a big + bold salad with lots of textures,

Open
Ideal Tuesday treat? My vote goes to these these b

Open
Happy May, friends! Here’s the real me complete