Guys! Seattle is still sitting RIGHT on the middle of the fence with this whole nice weather business. My solution? Gingered pork soup with green spring vegetables and szechuan broth! It’s the perfect way to warm up AND indulge in some of the new spring vegetables that are making their way into our markets. Because what’s the fun of resisting new spring veggies just because the weather isn’t exactly cooperating? 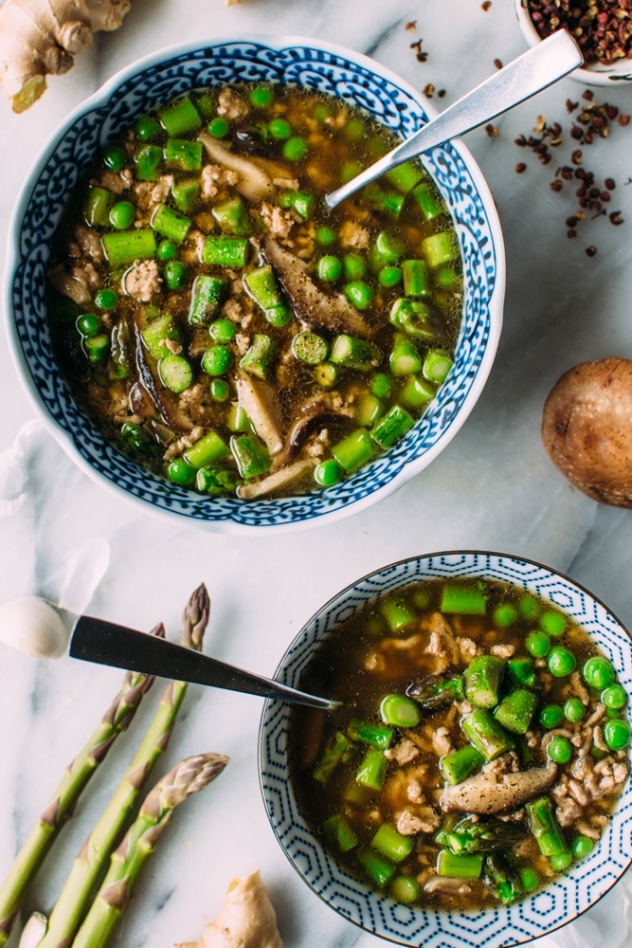 Full disclosure here.. I’m totally obsessed with this soup and I’m not even sorry about it.

It’s a brothy, umami rich, green spring vegetable loaded bowl of goodness and I’m reaaaally excited to be sharing the recipe with you guys! I made this for the first time a while ago.. and just re-made it again right before I left for the Everything Food conference. It didn’t all get eaten before I left so I tucked a container into the freezer so I would have a healthy meal to come home to when I got back. And while I wouldn’t recommend freezing it (the veggies got a little soft and turned a weird green color) I still happily ate it when I returned 🙂 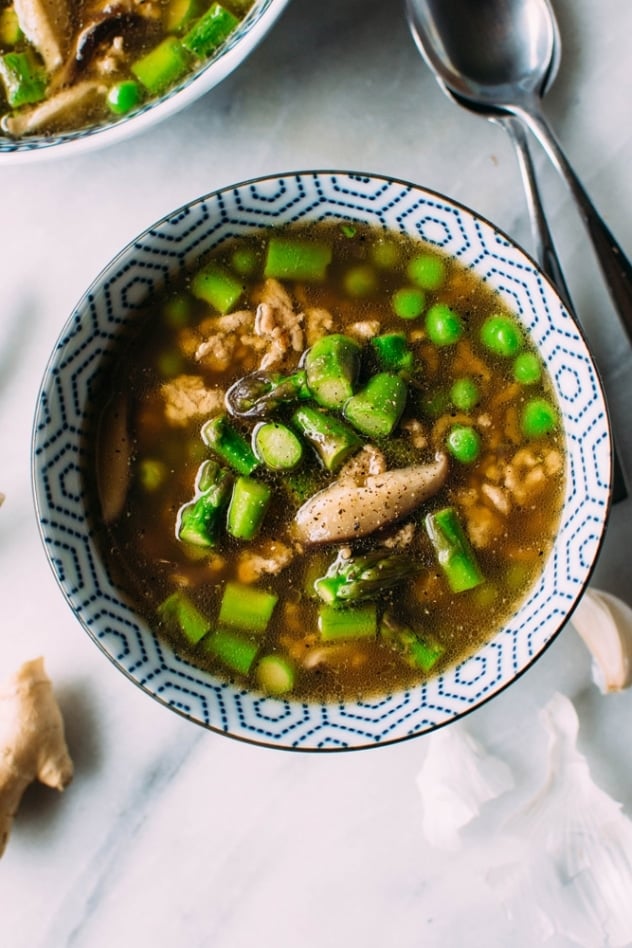 ground pork in my soup, though?

YESSSS! Please do it. I feel like ground pork in soup lends itself especially well to asian flavors, and this gingered pork soup is no exception. The internet does not exactly agree with me on this point, but trust me when I say that it’s beyond amazing. Maybe it’s not so much that the internet doesn’t agree with me, it’s just that the internet doesn’t yet know how awesome it can be. For some reason a couple of months ago I got this intense, out of the blue craving for an asian soup made with ground pork, so naturally I jumped on google to see what I could find.

Surely I’m not the only one who thinks this is a good idea?

I found a lot of recipes for asian soups made with pork meatballs (which we’ve already done! Remember this recipe for royal pho broth with cabbage ribbons and vietnamese spiced pork meatballs? SO YUM!), but nothing made with straight up ground pork, which for some reason is what my craving was specifically calling for. There’s something about the texture of it, and all the delicious broth and veg that you can get in each bite that just totally makes it an awesome eating experience. It’s almost like a de-constructed meatball situation.

So I just went into full on experimental mode.

The first soup that I made was a spicy coconut base with caramelized onions and cabbage. Pretty darn good but didn’t quite hit the spot of what my taste buds were searching for. Sometime’s it’s like they have a life of their own, ya know?

And then I remembered this incredible umami rich szechuan peppercorn broth that I used to make for the family I nannied for. It was served with seared black cod and mushrooms – a recipe from Epicurious that you can check out here. Then I KNEW I had found the perfect starting point for the bowl that I had been trying to make real.

It was game on. 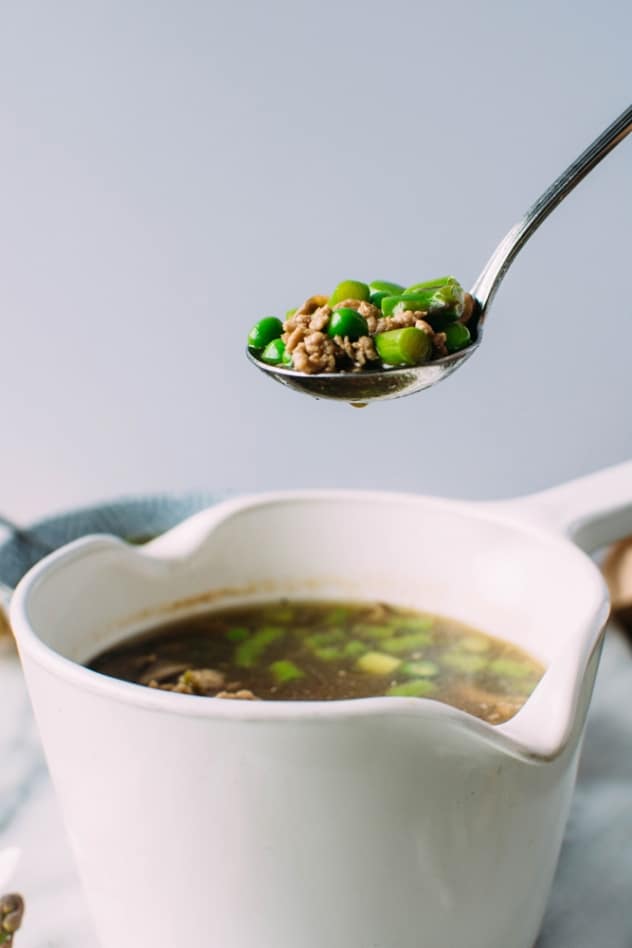 So let’s get into the details of this perfect gingered pork, szechuan peppercorn broth + spring vegetables combination.

First things first, let’s get the obvious question out of the way…

what is a szechuan peppercorn?

Szechuan peppercorn is actually not a peppercorn at all. Don’t you love it when the “people who give things names” do that? I’m sure it got that name since it resembles the look of a black or white peppercorn, and has some similar qualities, but still – so confusing! 🙃 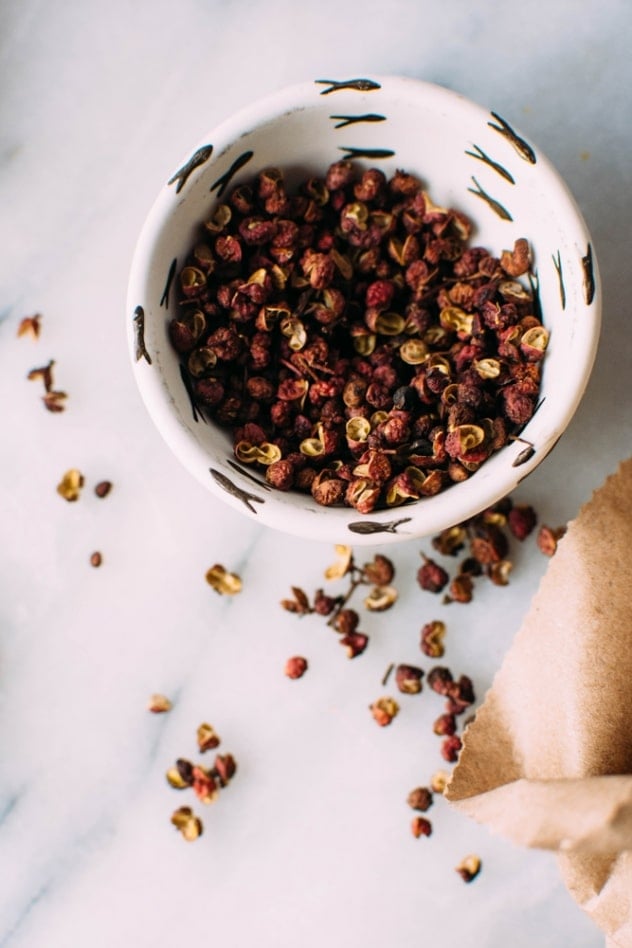 Not at all spicy, they have a bit of a citrusy, almost woodsy flavor, and impart a very distinct tongue numbing sensation, thanks to a little chemical in the berry called hydroxy alpha sanshool. If you’ve never tried szechuan peppercorns before you’re in for a pretty unique culinary experience! It’s a flavor and sensation like no other.

You may have, in fact, already have had it without even knowing. If you’ve eaten your fair share of Asian or Indian food I’ll bet you have, as it’s one of the 5 ingredient’s in chinese 5 spice, which is commonly used in those cultures.

Since this peppercorn is not super well known in the western world (it was banned for 40 years in the United States because it was thought to be a carrier for the disease citrus canker!) it can be a little tricky to find, and can also go by a variety of different names. Your best best for tracking it down is to check your local asian market or specialty food store and look for it under any of these names – sansho, dried prickly ash, dehydrated prickly ash, dried peppercorn, flower pepper, Indonesian lemon pepper, or the Chinese Mandarin name – Hua Jiao.

It will most likely be living next to to other dried herbs and spices, and is recognizable by by it’s pink to reddish hue and similar look to a peppercorn.

The other option for buying it is the amazing spice shop, Penzey’s. We have a physical store here in Seattle near Pike Place Market, but you can also easily order from them online. The quality is great and it’s not too expensive.

And now the next obvious question..

how do I make a broth with szechuan peppercorn?

It’s so easy! I swear the base of this soup is the best way to make an incredibly flavorful broth without much effort at all. Many recipes recommend toasting the peppercorns before adding them to whatever dish you’re preparing, but I didn’t do that here and the flavor definitely came through. It might be worth a try though, if you’re into the idea.

For the broth you’ll add thinly sliced ginger, shallots, garlic, some coconut aminos and the szechuan peppercorns and bring it to a boil, reduce to a simmer and let the flavors settle into the broth. And that’s it! Seriously!

The best part of that process is that while the broth is simmering away you have the perfect amount of time to prepare the rest of the recipe. Which makes this soup not only incredibly delicious, but also really fast to make.

and then come the green spring vegetables

What we’ve all been waiting for, right?! As we trudge through the depths of the winter they’re the light at the end of a long cold tunnel. 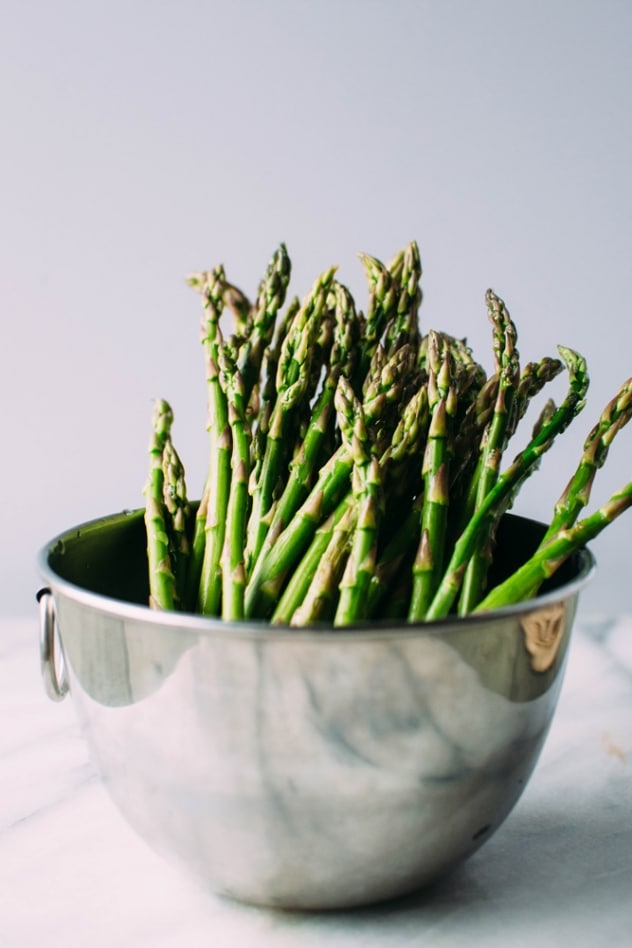 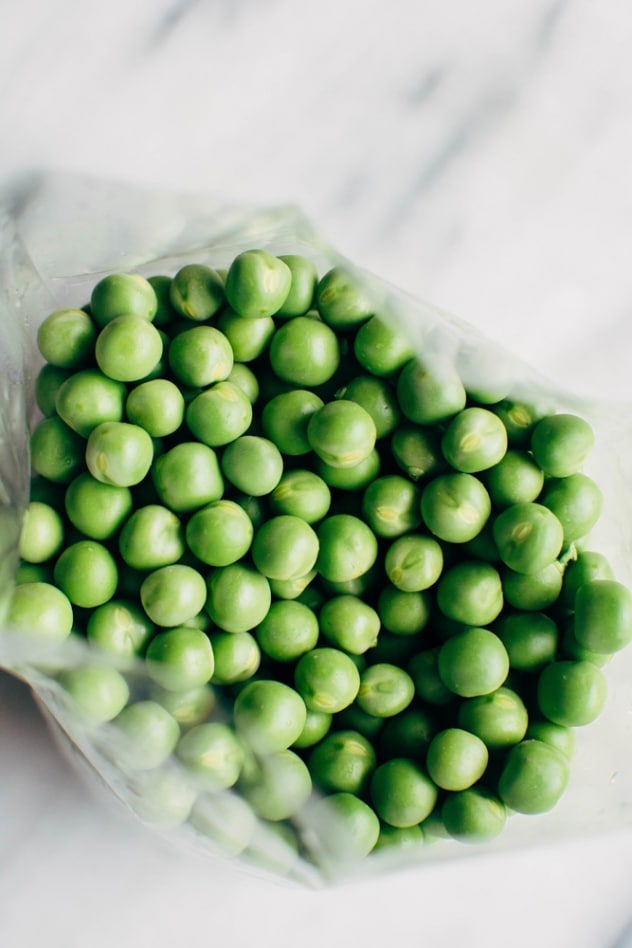 In my version of this recipe I chose to use fast cooking asparagus and peas, but if you want to go a different route you could sub in any number of green spring vegetables. Here’s some ideas to get your wheels turning:

I have no doubt that this soup would shine with any combination of those vegetables, however you may have to adjust the cooking time to match whichever you choose. I personally LOVE the combination of asparagus and peas, their shape and texture just shine, and the slight sweetness of the peas pair perfectly with the umami rich mushrooms + broth.

AKA a match made in HEAVEN! 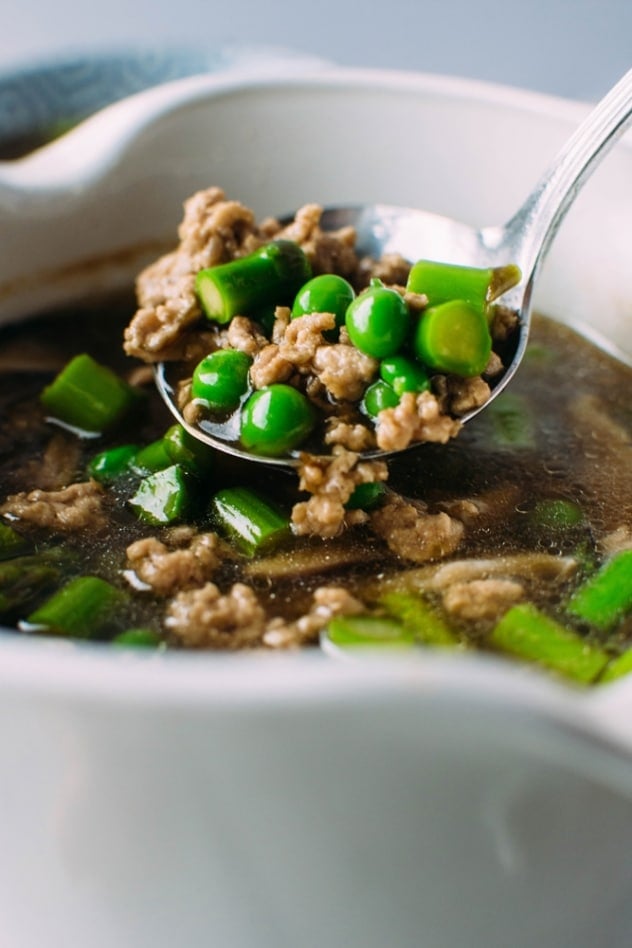 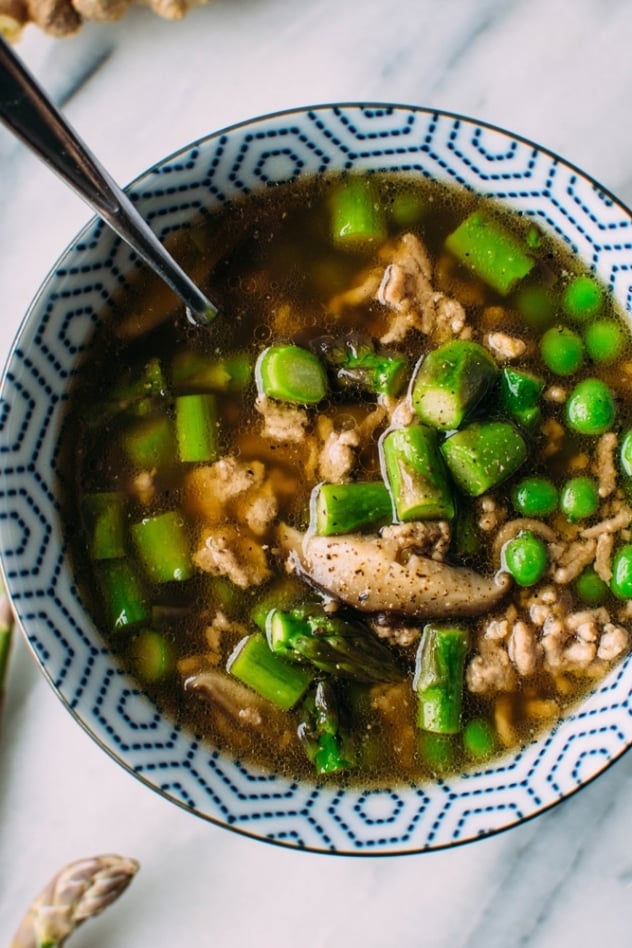 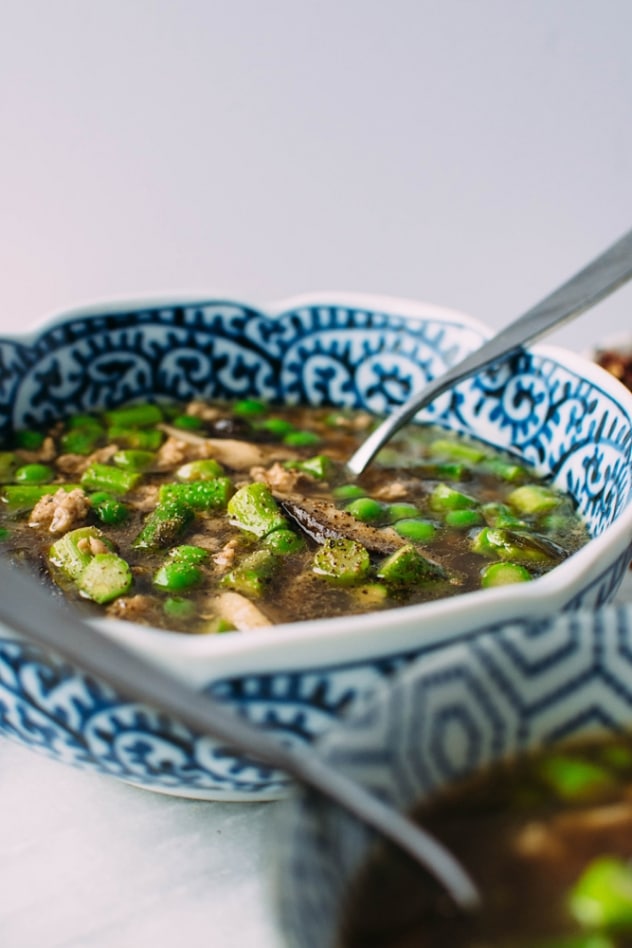 did you make this recipe? I would love to know how it turned out for you! when you rate my recipes and leave feedback it helps me continue to improve. you can leave me a comment below, or snap a picture and post it to instagram and tag me for a chance to be featured in my insta stories! @nyssaskitchen and use the hashtag #nyssaskitchen! xo

Gingered pork soup with green spring vegetables and szechuan broth made with asparagus, peas and shiitake mushrooms  – it’s an umami rich bowl of goodness and the perfect way to warm up AND indulge in some of the new spring vegetables that are making their way into our markets.

Depending on the fat content of your pork, you may want to refrigerate soup and skim the fat off the top before serving. I didn’t do this because I actually aim to consume healthy fats from pasture raised pork and I think it add a good amount of satisfying flavor – so it’s really an option of preference!