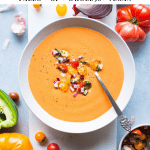 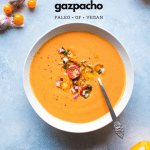 This ultimate summer gazpacho recipe is everything you could ever want from gazpacho. Bursting with flavor and full of wholesome ingredients. The perfect chilled summertime soup that highlights the best produce of the season. Super ripe heirloom tomatoes make it notably special, and a variety of other in-season vegetables like cucumber, peppers and red onions add an impressive depth of flavor. Plus – this version is made without bread! Which makes it paleo, vegan, and whole30 friendly! It is a summer dream come true. 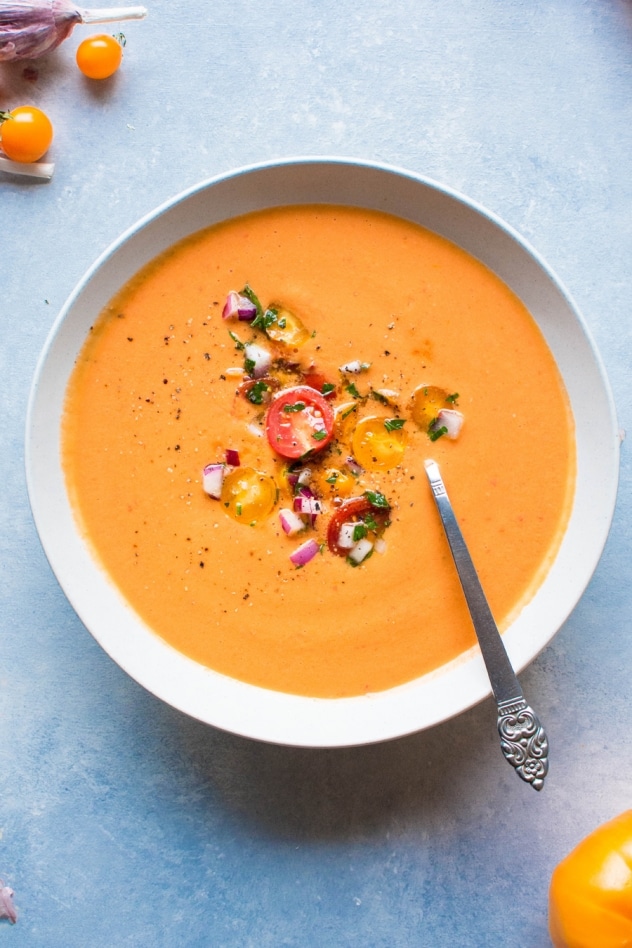 I never even liked gazpacho until I ordered it in Seville, Spain about 7 years ago. Likely story, I know. But it’s true!

I just feel like there’s so many not-so-good versions of this soup – and when it’s bad, it’s really bad. But apparently, when it’s good, it’s also really really good 😉.

I was in a little restaurant in the streets of Sevilla – and being in Spain, I felt like I had to at least try some gazpacho. And then I fell in love, finding out just how GOOD it could be when it was made right.

So when we finished our meal with this most epic gazpacho, we had to ask for some clues as to how they made it. Our waiter smirked – I’m sure because he’d been asked this question hundreds of times before by tourists, AND because I’m also pretty sure this was the type of place that doesn’t really HAVE recipes. But even though there were no direct measurements or instructions given, he did tell us what the ingredients were, and so I held on to that information and the sublime taste in my memory like my life depended on it. 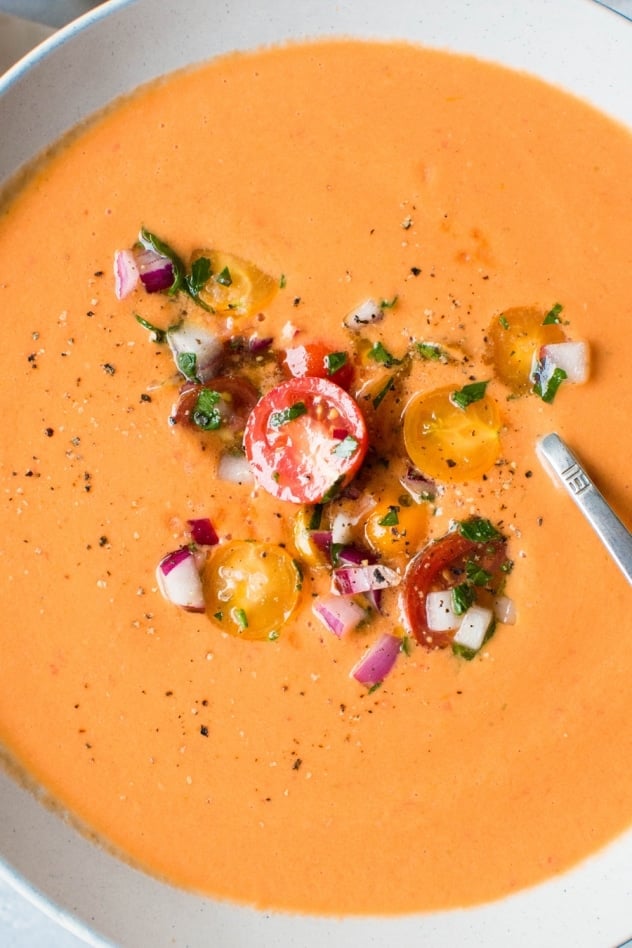 And when we got back to Seattle, I gave it a shot. And the first time, meehh, not so good. But the second time? Well… let’s just say, we ate it. And the third? BINGO. Nailed it. Third time’s a charm. Just like I was back in the cobblestone streets of Seville. Bright, chilled to perfection and bursting with summer flavor. 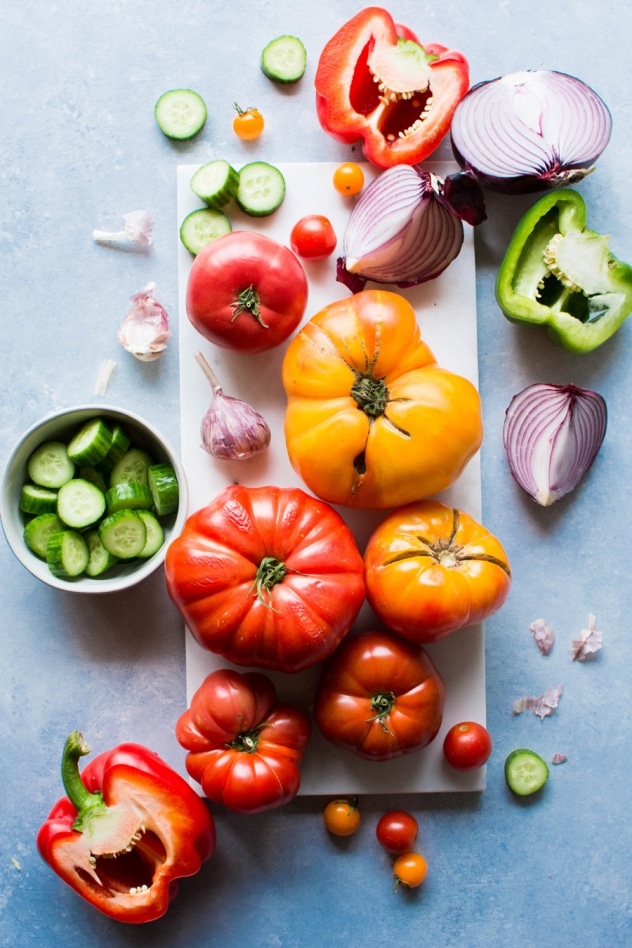 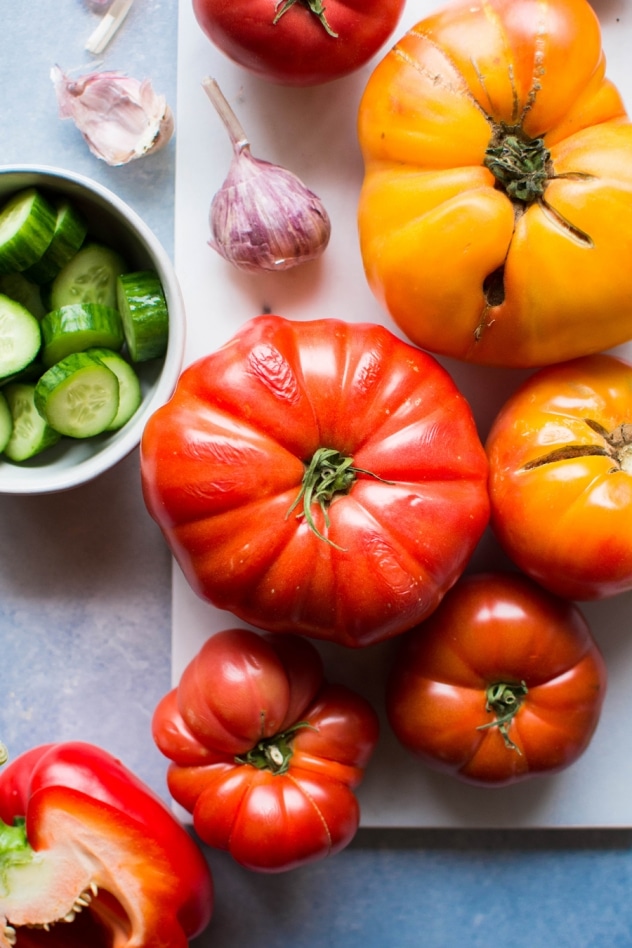 why you should make this ultimate summer gazpacho

Because it’s the time of year when tomatoes are just as sweet as candy, late summer is the perfect time to make this soup. If some ripe juicy heirloom tomatoes are not growing in your backyard you can probably find some at the store / farmer’s market for a super affordable price, or from a friend who has more tomatoes than they know what to do with

Tomatoes that are so ripe you have to handle them with delicate care or their skin will just burst open under the pressure of your fingers. Tomatoes that you practically want to strap into a car seat to get them home safely.

When I was shopping for this recipe I picked up an heirloom tomato, turned it over to inspect it, and literally heard the juice slosh around inside the tomato it was so ripe. I put that one in my basket 😏 That’s the kind of ripe that you’re looking for with this recipe. Since it’s pretty much only vegetables – and mostly tomatoes – you want the best and ripest you can find for the best and most summery flavor.

This will make the best gazpacho. 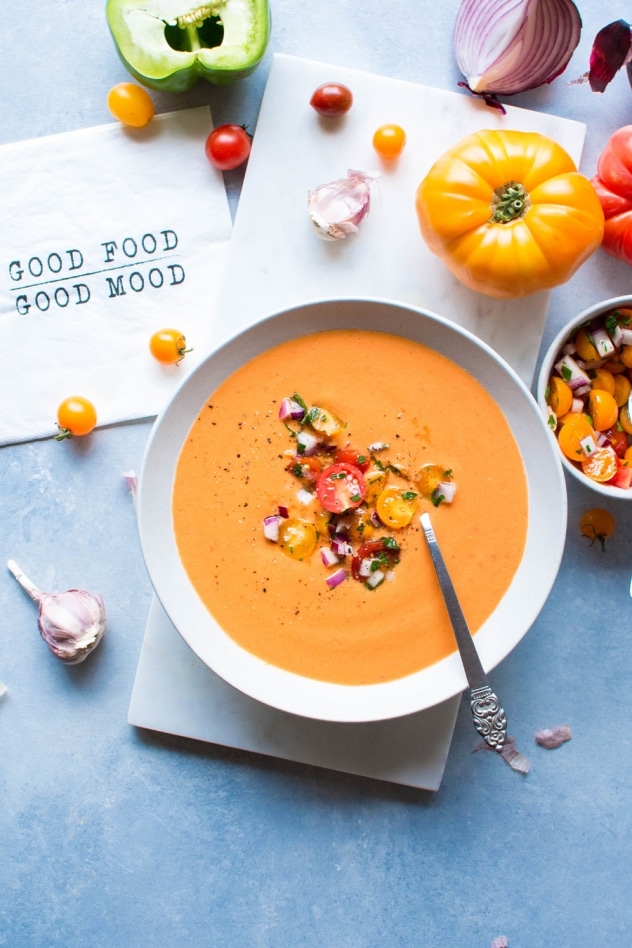 how to make the ultimate summer gazpacho recipe

In the Spanish version of gazpacho that we fell in love with, they used crusty bread to thicken it up (as many traditional recipes do), but now since I’m strictly gluten free, I leave out the bread and instead rely on olive oil and not straining the blended soup to maintain the robust consistency that the bread usually adds. This works especially well if you have a high speed blender like a Vitamix or a Blendtec, which will have no problem blending the soup’s ingredients completely smooth. If you don’t have a high speed blender, and you can’t make the soup completely smooth by blending, you have two options:

I find the second option to be a little tedious, and it also takes out a lot of the beneficial fiber in the recipe, but it is an option!

Making a little salad for the top of the gazpacho with fresh and sweet cherry tomatoes, a little diced red onion, some parsley, and olive oil and vinegar adds just the right bit of “extra” to this recipe, but it’s not necessary. If you decide to go for it, only make about as much tomato salad as gazpacho you’re going to eat. It will start to break down and lose it’s integrity if you leave it sit in the refrigerator for more than a few hours. In the recipe below the quantities for the tomato salad are for about 2-3 servings of gazpacho, but it can easily be doubled or halved.

After you make the gazpacho, let it chill in the refrigerator for several hours, or up to overnight. This is one of those recipes that only gets better with time. 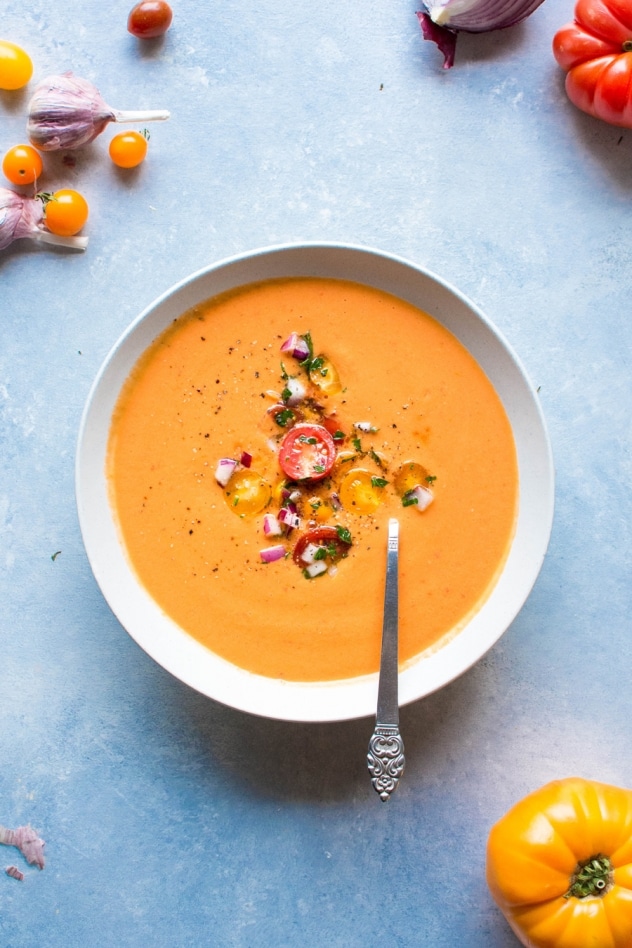 I don’t know about you guys but I’m thinking of making a second batch of this once the one currently in our refrigerator disappears to stash in the freezer for those rainy February days when you can’t even remember what a ripe tomato tastes like. Maybe not quuuuite in line with eating seasonally but sometimes you just need a little mid-winter pick me up in the form of a defrosted summer gazpacho 😜.

This ultimate summer gazpacho recipe is everything you could ever want from gazpacho. Bursting with flavor and full of wholesome ingredients. It is the perfect chilled summertime soup that highlights the best produce of the season. Super ripe heirloom tomatoes make it notably special, and a variety of other in-season vegetables like cucumber, peppers and red onions add an impressive depth of flavor. Plus – this version is made without bread! Which makes it paleo, vegan, and whole30 friendly! It is a summer dream come true.

(Makes enough for about 2-3 bowls of soup. You really want to make this salad right before eating to preserve the texture and flavor of the ingredients used. If you’re planning to eat/serve all the soup the recipe makes, double this recipe for the tomato salad garnish)