Thanks to cashew cream, this creamy dairy free chicken and cauliflower rice soup is so creamy and delicious that you would never know it was dairy free! Made with all the same flavors of a classic chicken and rice soup, but paleo, and whole30 friendly for a satisfying and healthy meal. 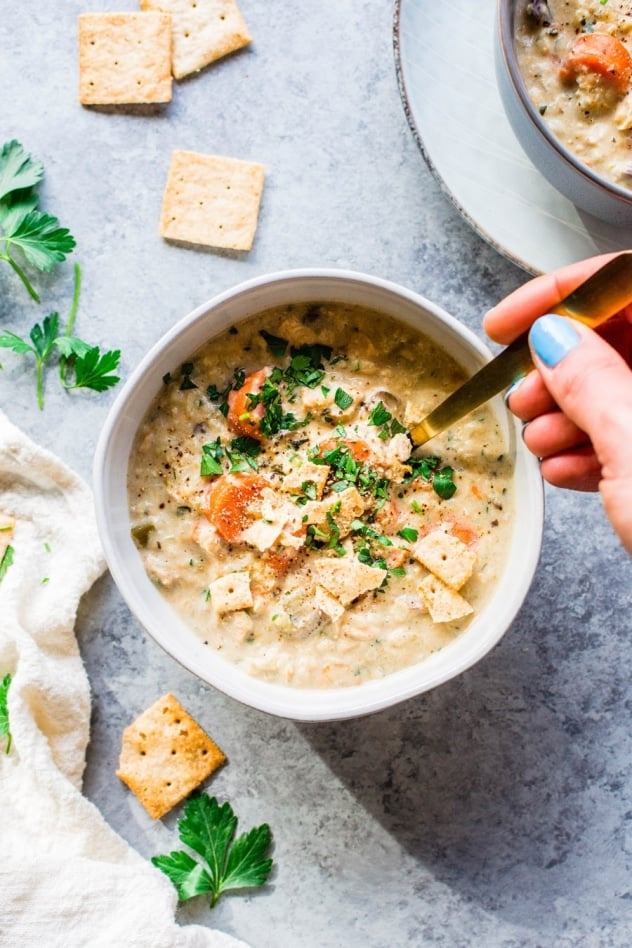 Well here I am about to talk about the weather again, and how it relates to what I’m in the mood to eat 😂

But that’s just the way it works, right? I mean, sure there’s sometimes where we crave warm soups in the middle of summer, or a bright and refreshing green juice during a deep mid-winter freeze, but for the most part the seasons really do sort of steer our dinner cravings.

And as we all know, even though it’s April most of us are still battling winter weather.

I just returned from a long weekend in Wisconsin and Minnesota and I can definitely testify that they are for sure still tromping around in the snow. And while it has started warming up a little in Seattle, even here the gray skies and rain have yet to lift.

Which, IMHO, is a perfectly good reason to schedule this creamy dairy free chicken and cauliflower rice soup into your meal plan for this week 💯 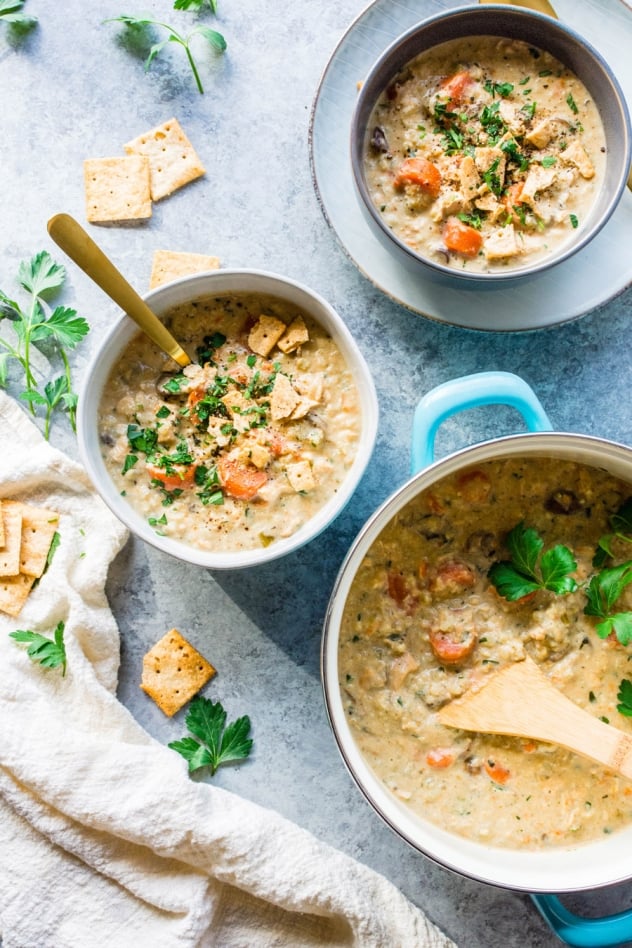 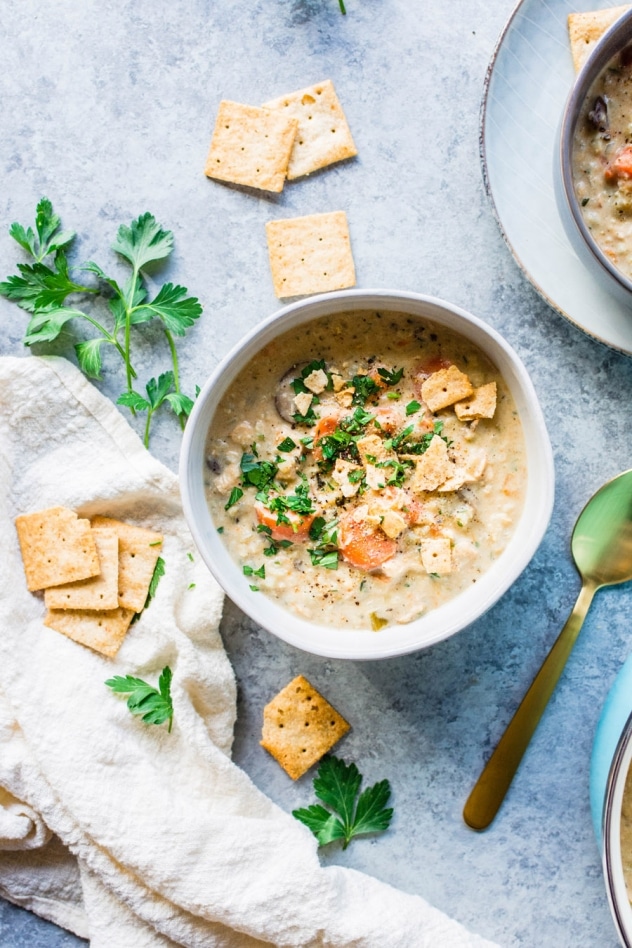 Because simply put – it will give you LIFE.

I mean we only ate it, I don’t know, 15 times before I finally had a chance to photograph it! I kept making it with the intention of taking some pictures, and it kept getting tucked into tupperwares for lunch and warmed up for an after work dinner alongside some simple mills almond flour crackers (JUST DO IT – I promise you’ll thank me later). 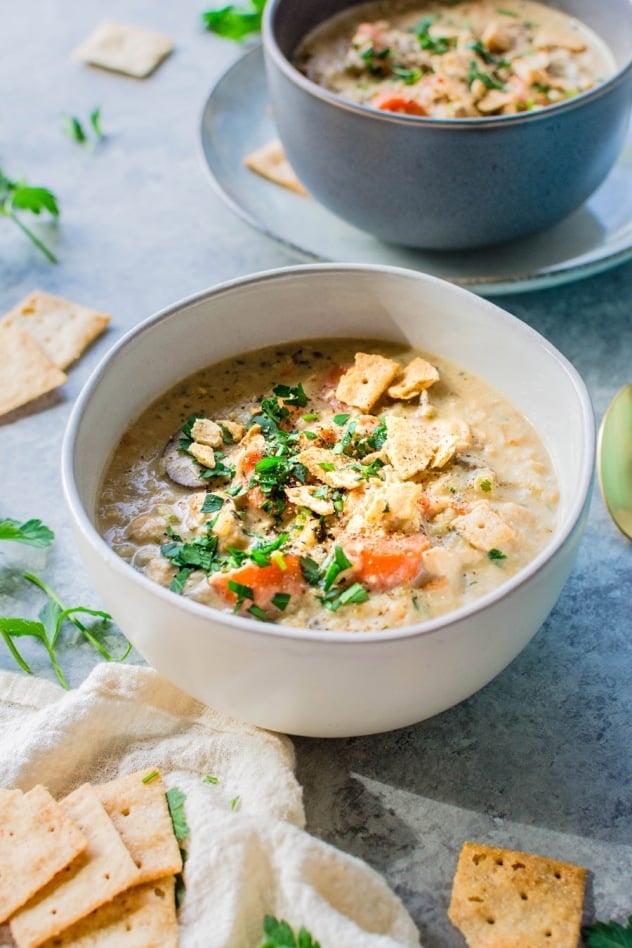 so what makes this creamy dairy free chicken and cauliflower rice creamy?

For some reason, unless it’s an asian style soup, I just can’t with the coconut milk in place of dairy to make soup creamy. When I go that route all I can taste is the coconut and it really feels like it overpowers all of the other flavors. And for a soup like this, that’s just not the mood I had in mind.

So of course I chose to use the ever trusty cashew cream route.

I am BEGGING you, if you’ve never tried using it instead of cream/dairy in soups and sauces, you just have to.

It has such a neutral flavor that you can add it to just about any savory (and even some sweet!) recipes and it will fit LIKE. A. GLOVE.

If you want some other cashew cream recipes to try take a peek at these! 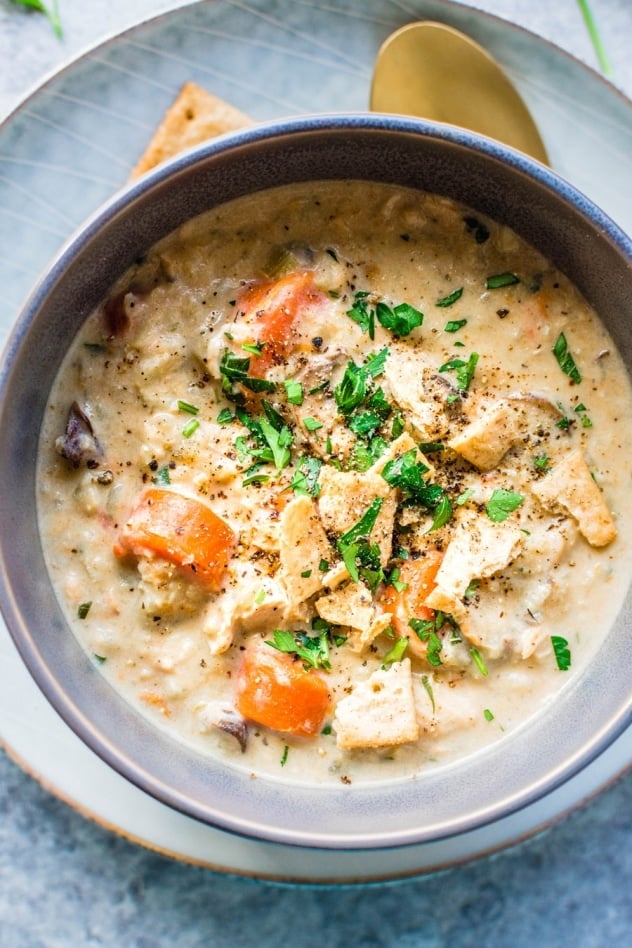 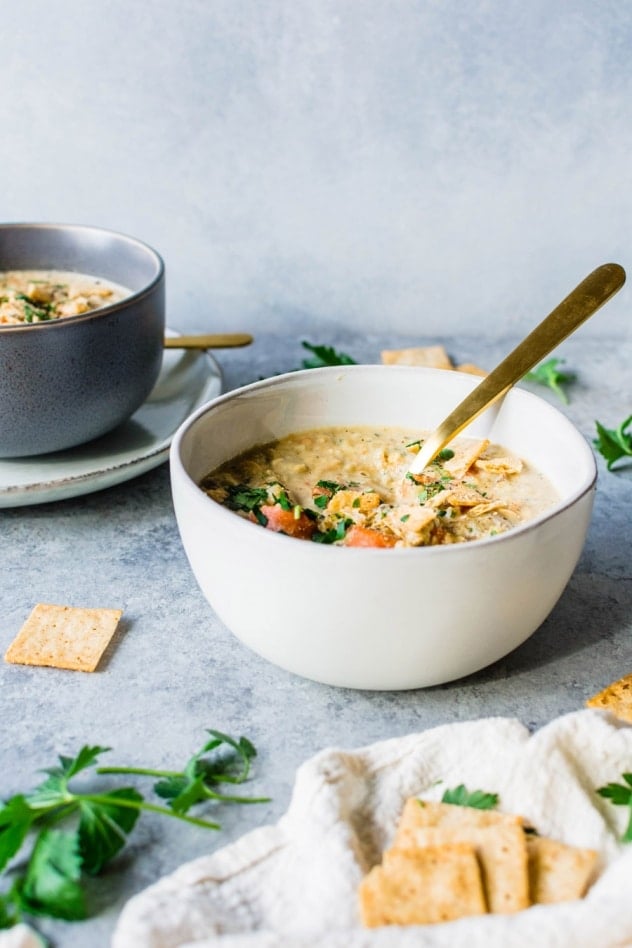 So this week I’m going to do my best to stop complaining about the weather, and instead make some of this creamy dairy free chicken and cauliflower rice, cozy up with a book, and embrace whatever April has in store for us.

Thanks to cashew cream, this creamy dairy free chicken and cauliflower rice soup is so creamy and delicious that you would never know it was dairy free! Made with all the same flavors of a classic chicken and rice soup, but paleo, and whole30 friendly for a satisfying and healthy meal.

Before you begin: Follow the link in the ingredients list to make cashew cream first. The cashews need to soak at least for a hour with boiling water or up to overnight before you can blend them and turn them into cashew cream