There seems to be a trend happening on the blog lately… I guess when it’s this time of year I’m just naturally drawn to all the cozy meals! 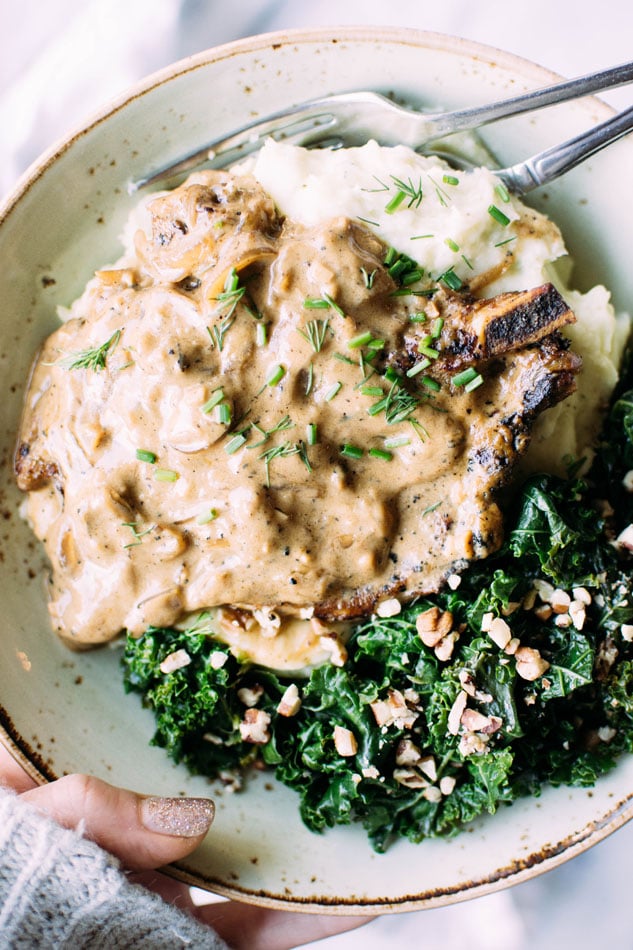 This dish, probably more than any other dish that I’ve made, reminds me of my grandmother’s dinners. 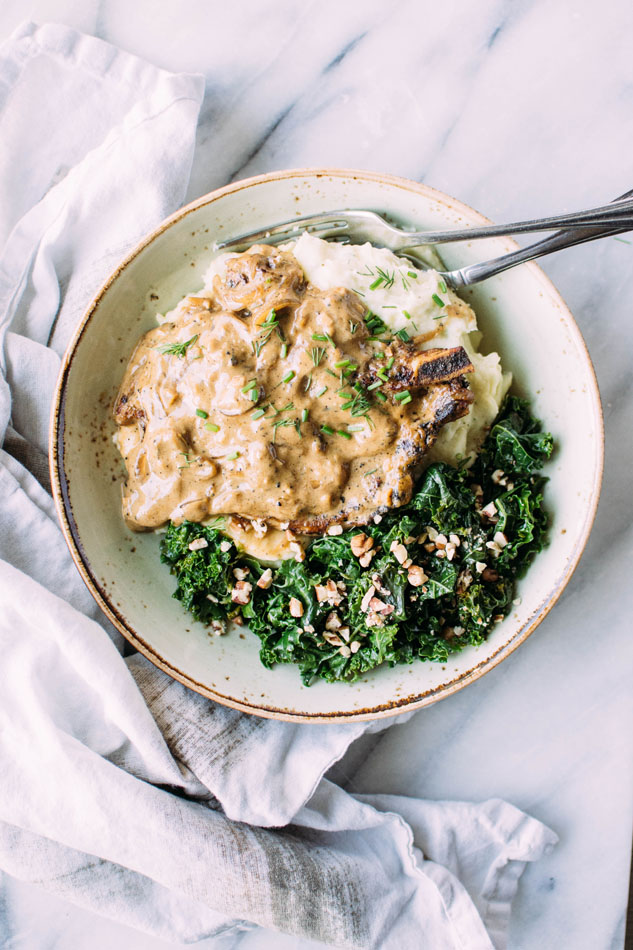 She used to make smothered pork chops for dinner what felt like every week. Her version was definitely made a little bit differently though – with canned cream of mushroom soup, served alongside some rice and steamed lima beans (my favorite // least favorite veggie that I always said I hated but always finished – oh to be five again 😂)

This version has no canned soups, no grains, and is totally dairy free. Sounds pretty phenomenol, right?

Wanna guess the magic ingredient that makes the sauce so creamy? It’s one I’ve been playing around with a lot lately…

Aka the miracle ingredient that makes you feel like you’re eating dairy when you’re totally not. 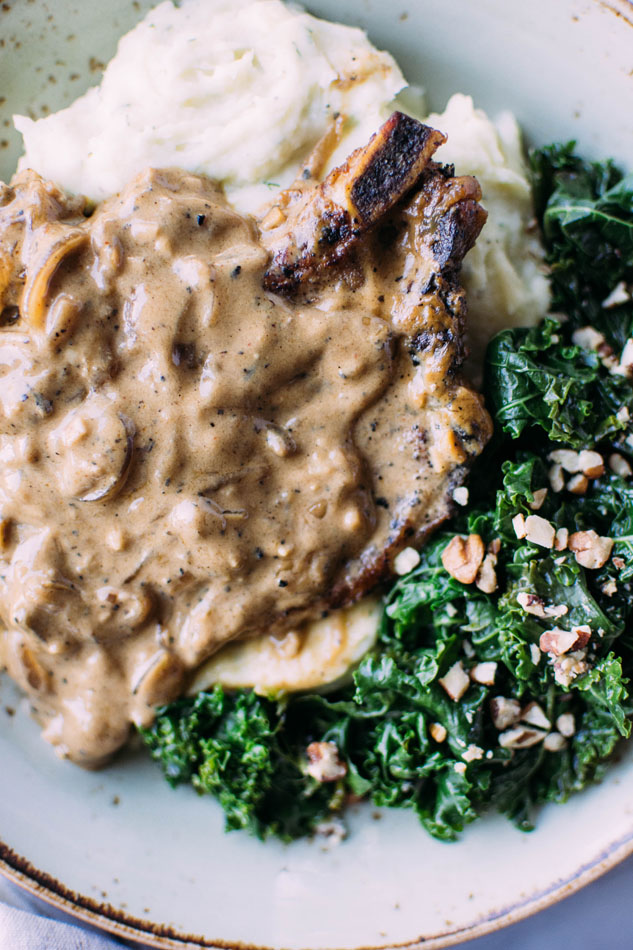 And guys. The flavor of this sauce is reaaally something special.

By slowly caramelizing thinly sliced onions + garlic (hello dream team!), and adding a few flavor bombs like nutritional yeast, coconut sugar and paprika you get something so complex and inviting it tastes like it has been cooking all day long. When in reality it comes together in less than 30 minutes, and most of the cooking time is hands off so you can be working on other parts of the meal! 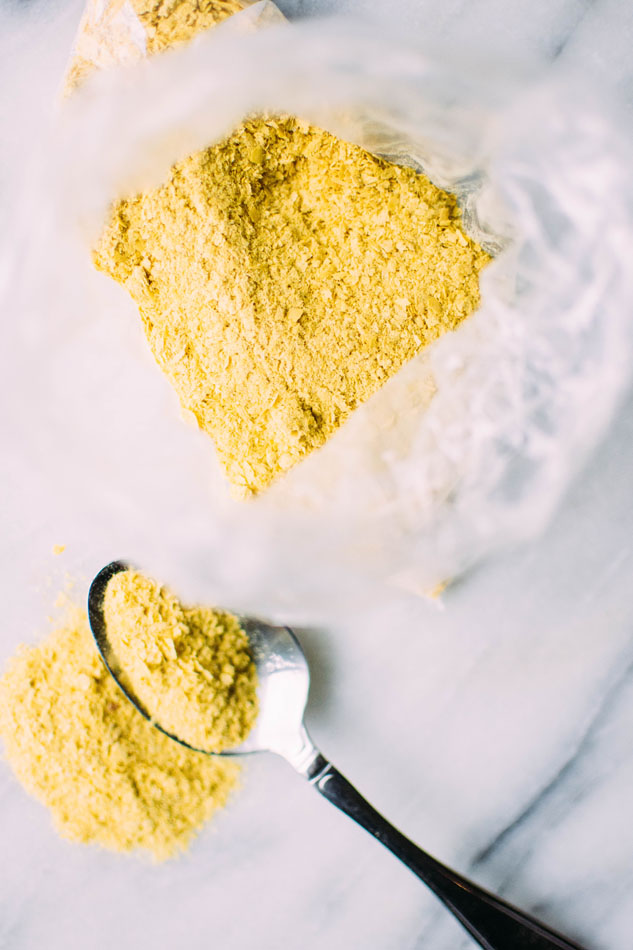 The herb whipped parsnips are a fluffy, herb flecked dream. They stand in as a more nutritionally beneficial starch than potatoes/rice/etc. They’re best made in your food processor to really acheive the whipped quality, but you could also use your stand mixer or a traditional hand held potato masher.

I used ghee as my fat in the parsnips, but it could so easily be swapped out for olive oil or another fat. 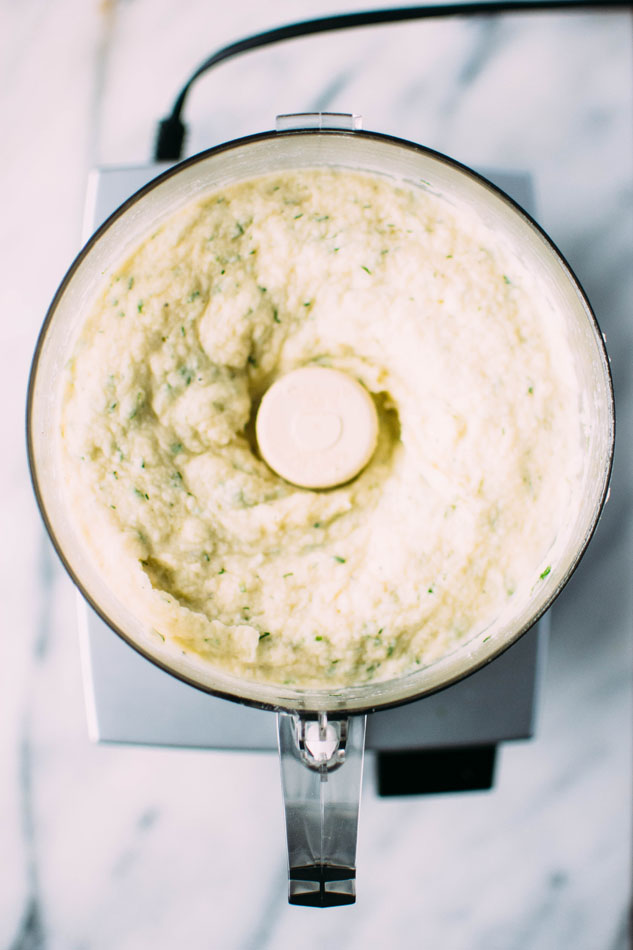 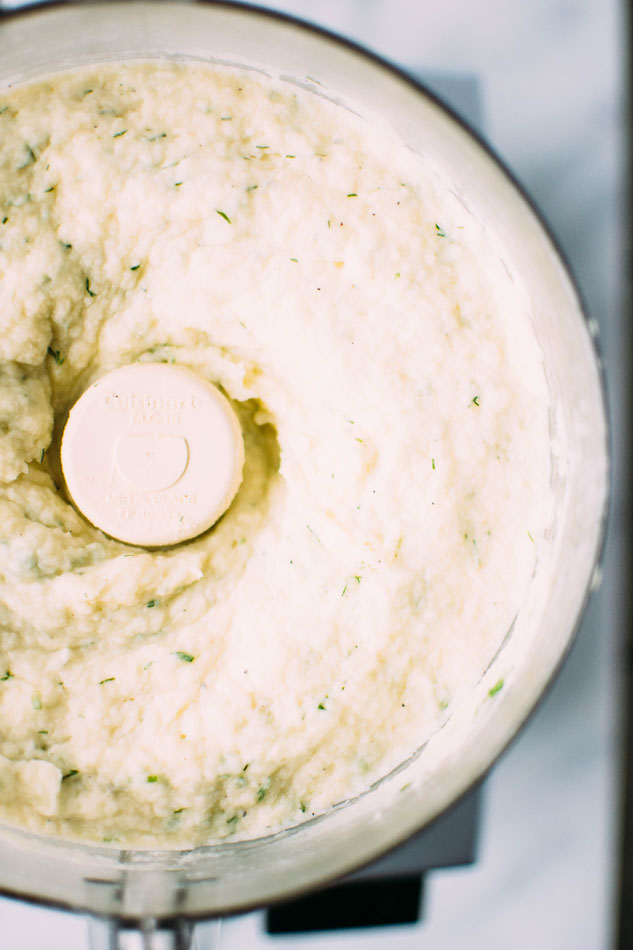 And the kale? Well the kale is there for every reason we ever add kale to any meal – it’s delicious, something green and bright to lighten up the plate, and squeezes in your daily dose of greens in. It could easily be swapped out for whatever cruciferous // green veggie you have on hand. 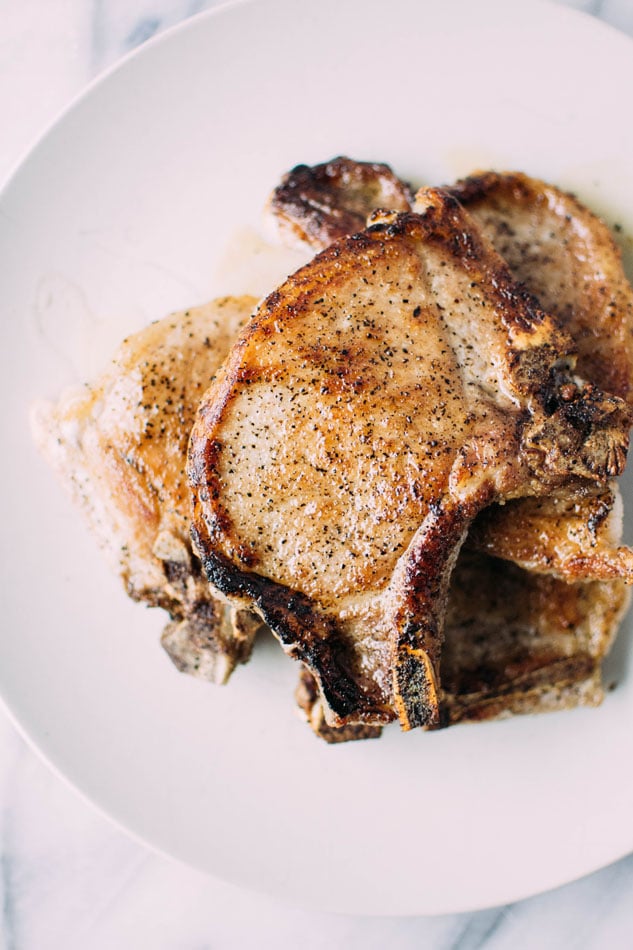 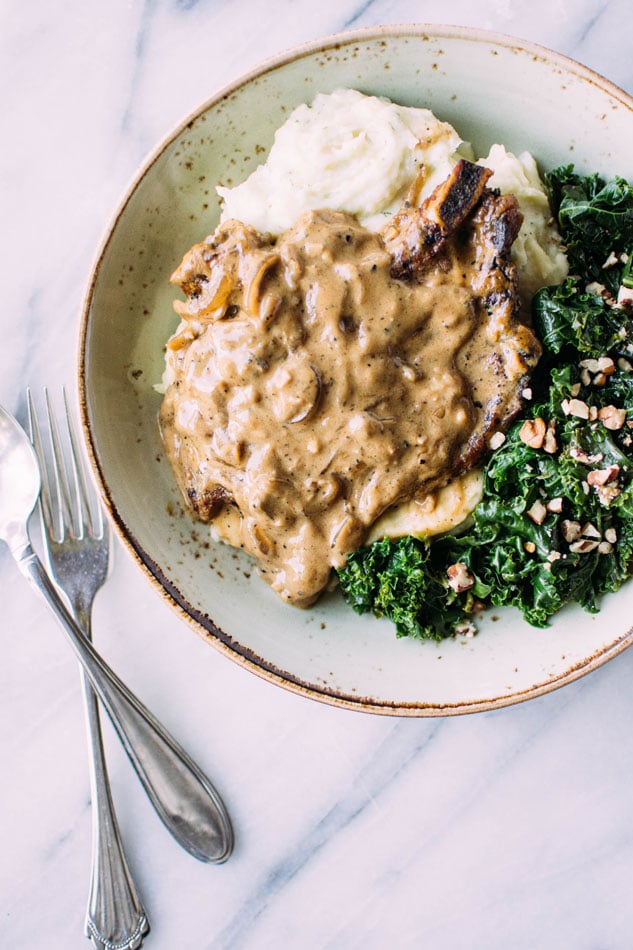 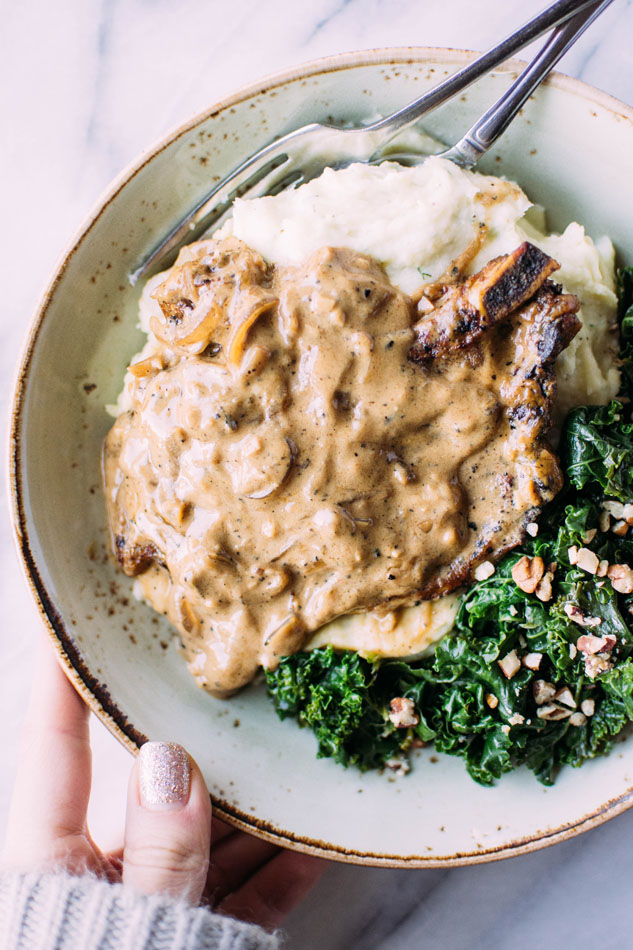 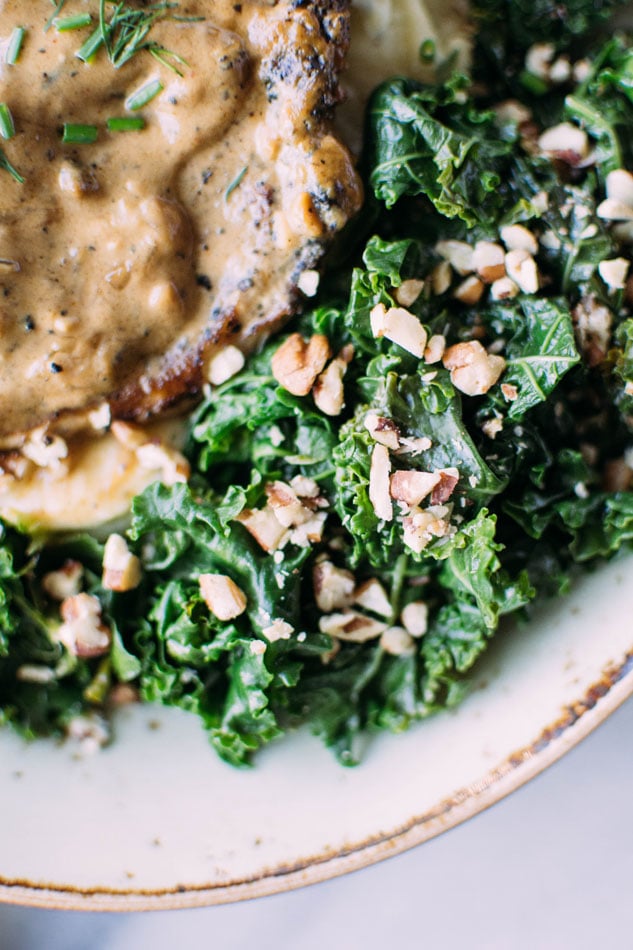 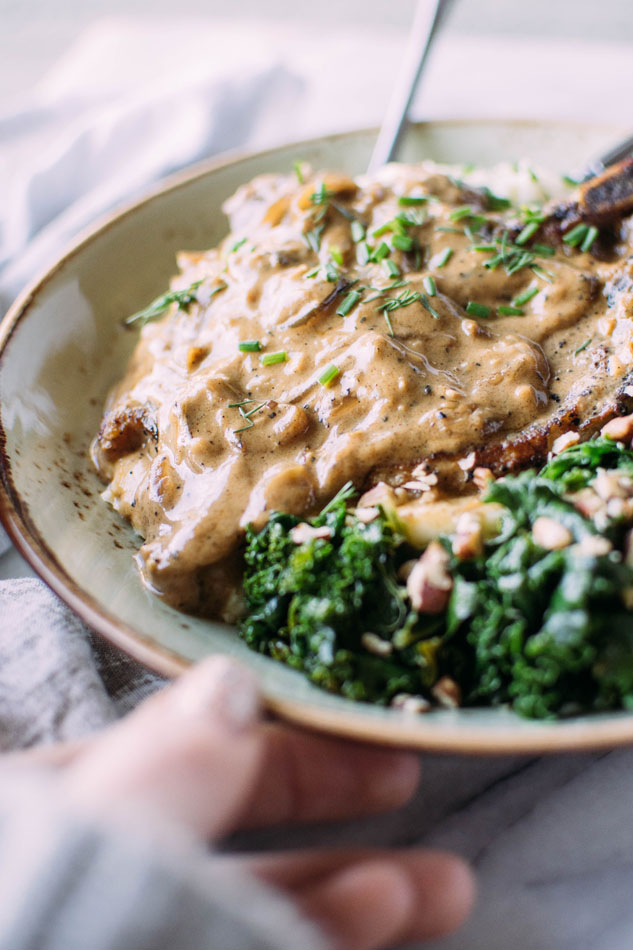 Happy cozy mid-week, babes! Enjoy this satisfying and midwest inspired meal made with wholesome ingredients and lots of love!

Caramelized onion smothered pork chops with herb whipped parsnips and kale are here to take your gluten free // paleo dinner to the next level of comfort + satisfaction! Nestled in a creamy dairy free sauce these pork chops pair perfectly with dreamy whipped parsnips and bright and nourishing kale for the perfect comfort food meal.