nothing says hiii fall 👋🏼 quite like a big bowl of kimchi and buckwheat noodle egg drop soup. 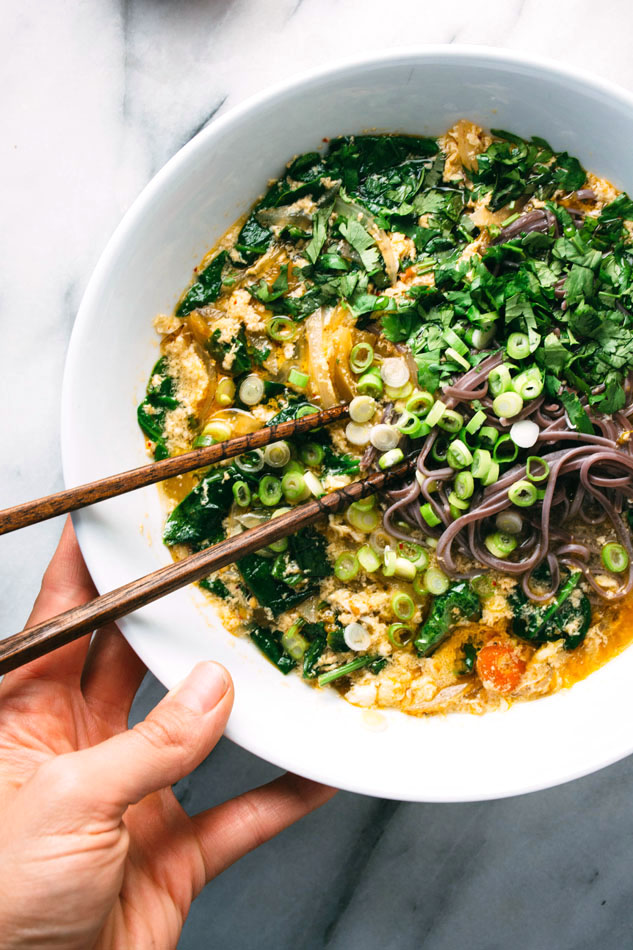 even on sunny days, here in Seattle, the crisp chill has crept into the air and the leaves have changed to stunning tones of red, yellow and orange.

pumpkin spice and cinnamon apple everything are everywhere.

my (sweater-clad) arms are open and ready for these autumn tones, temps and flavors, and this soup, warm, rich in flavor, packed with tonifying greens, herbs and green onion with a little spice that’s mellowed out with luxurious coconut milk, fits right in.

I have totally been on a kimchi-kick lately, and it’s pretty much the best thing that’s happened to my soups, stews, and fried eggs. especially when you find one that seriously rocks like this one that I am OBSESSED with👇🏼👇🏼👇🏼

it’s made with only the good stuff; no MSG, and plenty of bangin’ flavor in your mouth. chopped up it makes an excellent and probiotic rich addition to just about any savory application.

one of my favorite fast-food-made healthy shortcuts that I have been using it for is adding it to some bone broth with veggies, coconut milk, and a fried egg. the most delicious, healthy fast food you have evvvvverr had 😋😋😋

and I don’t throw the word around “ever” lightly.

for this recipe, though, I decided to fancy it up a bit and go egg-drop-soup style AND add some delicious buckwheat noodles. buckwheat noodles are what works for my eating restrictions right now (more on that later) but you could easily substitute another noodle if you can’t find these, or leave them out altogether for a low carb/paleo option.

like all good soups, this one get’s started with sauteed onion, bone or vegetable broth (for a vegetarian option), and a big scoop of chopped kimchi. once those goodies are simmering away you will add the egg that has been gently beaten with a bit of salt and pepper.

the trick here for getting the egg drop soup part just right is to hold your bowl of beaten egg over the just BARELY simmering soup (if the egg is added to soup that is too hot it will lose it’s soft texture), and, using a fork, drizzle the beaten egg a little at a time into the hot broth, stirring the soup with the fork as you go. the egg will cook pretty much immediately upon adding it to the soup.

once you’re done with that step add a big handful of baby spinach and cook just until wilted. this will probably only take a minute or two.

at this point you’ll want to add the coconut milk (yaaaaaas), season the soup with salt, a big squeeze of lime juice and a little chili sauce if you want it extra spicy. ladle it over your already cooked noodles and top with some flavorful cilantro and thinly sliced green onion and you are in BUSINESS!

so go make yourself some! because every proper welcome to October should include a meal as cozy and satisfying as this one.

kimchi and buckwheat noodle egg drop soup! so super simple yet incredibly flavorful soup made with kimchi, spinach, buckwheat noodles and coconut milk. perfect for cool autumn days! can be made paleo by leaving out the noodles.

Whole30 Food List: What you can and can’t eat {with a printable PDF}

Girl I am making this with my Mama over the holidays! Dah-rooooo-ling over here!

What an amazing recipe! I’m a big fan of Kimchi-jjigae, so kimchi based soups always attract my attention. Doubled the quantities, and based on personal preferences, added 16oz of kimchi and also Sriracha. My mistake was adding Aroy-D coconut milk, which has very strong coconut flavour, so most likely next time I’ll choose something lighter. But overall it is a delicious soup that I will cook regularly. Thanks a lot!

Yes! Love nearing that, and the ways you tweaked the recipe! So happy you love it! I’ve been meaning to make this one again soon. So comforting and flavorful ☺️

[…] Kimchi and Buckwheat Noodle Egg drop soup – (Nyssa’s Kitchen) For kimchi followers. This one is for you. Kimchi + Egg drop soup […]

[…] Kimchi and Buckwheat Noodle Egg drop soup – (Nyssa’s Kitchen) For kimchi fans. This one is for you. Kimchi + Egg drop soup […]

[…] Kimchi and Buckwheat Noodle Egg drop soup – (Nyssa’s Kitchen) For kimchi fans. This one is for you. Kimchi + Egg drop soup […]